On December 10, 2020, the game “Cyberpunk 2077” by the successful Polish game studio CD Project Red was released. Long awaited, it is already one of the most elaborately produced game titles to date.

An estimated 250 million dollars went into the production and over 250 actors and actresses recorded hundreds of hours of dialogue, including Keanu Reeves.

The role-playing game has a world of over 250 square kilometers to explore.

Pretty hyped about the game myself, I’ve put together a topic page to give you a little background on this influential subgenre of Science Fiction.

“Cyberpunk is a subgenre of Science Fiction that clearly foregrounds information and communication technologies, especially cyberspace. With >cyber<, cybernetics and related disciplines such as artificial intelligence (AI) and artificial life (AL), but also phenomena such as clones, androids, cyborgs, and virtual reality (VR) or augmented reality (AR) are addressed.

The term >Punk< refers to the youth movement of the 1970s and 1980s in that the anti-authoritarian-anarchist attitude characteristic of this movement is made productive in the sense of a critique of capitalism and more technological-social than decidedly political rebellion under the auspices of the postmodern information and communication society.

The term Cyberpunk first appeared in 1980 as the title of a short story by Bruce Bethke. In 1984, William Gibson’s novel Neuromancer appears, which is still considered the prototype of the genre.”

In addition to the aforementioned themes and motifs in the Cyberpunk media, there are some other motifs that allow a work to be assigned to this subgenre.

Of course, these are not fixed, absolute specifications, but some commonalities can be found again and again.

As is generally the case in Science Fiction, the action takes place in an urban setting. Most of them are megapolises, i.e. gigantic cities. They are characterized by skyscrapers, omnipresent technology and advertising. The city is shown rather chaotic, disorderly and anarchistic. Cyberpunk belongs to dystopian Science Fiction, which is why everything is shown in a certain state of decay, litter and neglect.

The dystopian-anarchistic setting in combination with the focus on technology often creates a hypercapitalistic world in which state authorities hardly exist anymore and the fates are controlled by massive corporations. The omnipresent advertising, be it signs, projections, holograms or even media fed directly into the body’s own cybernetics, thereby underscores the capitalist.

If we look at image media that can be assigned to Cyberpunk, strong blue and purple tones dominate above all, often also with a stab in the direction of red & magenta. This is then accentuated by holograms or neon lights in bright colors. Luminous is to be understood literally here, as these are of course elements generated by light.

This is all the more apparent since it is often nighttime in cyberpunk settings, or at least cloudy and rainy. This makes the light and color elements stand out even more.

The dominating blue tones are no coincidence, as this color has stood for everything transcendent, celestial, and non-earthly in color iconography for centuries. The color blue occurs naturally in nature (flowers, gemstones, feathers), but is much rarer than, for example, green and earth tones. Blue stands for the intangible like water or the sky (concrete as well as abstract).

Correspondingly, with the advent of our modern information technologies, the color blue is closely associated with everything digital and is used that way in almost all Science Fiction settings.

Technology has replaced religion in Cyberpunk, as it has in most of science fiction. Either it no longer plays a role at all and is not shown in the form of buildings or symbols. Or former sites of faith are repurposed, for example a neo-Gothic church as a police station in Altered Carbon. It is more common for technology to take on the role of religion: be it as a source of meaning, as a relationship to death and the afterlife, but also as an answer to the Big and Ultimate Questions.

In this episode of Game Over(analyzed), Associated Researcher of Media Culture Lars Schmeink breaks down how cyberpunk is portrayed in modern video games. Most people recognize the cyberpunk aesthetic from movies like Blade Runner and The Matrix, but there are plenty of video games that fit into this subgenre as well. Lars talks about how the cybernetic enhancements from games like Cyberpunk 2077 and Deus Ex: Human Revolution relate to both real-life and cyberpunk fiction.

Lars Schmeink is an Associated Researcher of Media Culture with Hans-Bredow-Institut. Lars is co-editor of “The Routledge Companion to Cyberpunk Culture”.

My contribution for the Cyberpunk Culture Conference, organized by Lars Schmeink, about urban architecture in Cyberpunk using Altered Carbon as an example.

For all who also want the right, musical atmosphere to the Cyberpunk theme, I can warmly recommend Extra Terra. Pretty hard EDM that fits perfectly to the cyber-tech worlds.

Pay attention to the color scheme on the videos and album covers. It coincides perfectly with my thoughts on the predominant color palette in cyberpunk.

Like me, you can also support him on Patreon. I am also one of his supporters!

The fashion label Balenciaga picks up on the topic of cyberpunk several times in its autumn 2021 collection: On the one hand, all designs are heavily based on cyberpunk and science fiction and pick up on various trends from series, games and movies.

On the other hand, they chose a very unusual way of presentation: Since fashion shows are not possible due to the corona, a game was created. The handling takes a little getting used to, but in itself an exciting approach. And the city you move through has some very interesting buildings that are clearly taken from science fiction, but at the same time also from modern urban planning and architecture.

Balenciaga is way out of my budget, but there are some cool things in it.

Here you can see the Gamified Fashion Show.

The long-awaited game from the Polish studio CD Project Red! The makers of The Witcher have put quite a lot of work and money into this open world game. It is all the more disappointing that it is hardly playable on the current-gen consoles. Some updates and patches are said to have improved this, so that you can make ends meet until the new generation of consoles is generally available. The PC version seems to be less vulnerable.

For sure, I’ll be spending the holidays in Night City! The world is huge, mostly urban and the story is really exciting. Besides, V is a little hot …

For me, Instagram is an inexhaustible source of fantasy art. There you can find some of the most talented artists, the most exciting concepts and always fascinating creations.

An example of fantasy art that came to mind on the subject of Cyberpunk would be Belarusian concept artist Max Bedulenko. In many works he combines the historical and the future, mostly with a clear Cyberpunk impact.

Check his ArtStation profile for bigger scales of his art.

Based on Richard Morgan’s trilogy of novels, the Altered Carbon series is set in a dystopian-cyberpunk future. Thanks to a new technology, people are de facto immortal because their consciousness and memories can be transferred to a new body through an implant. The series visually draws on many of the above-mentioned motifs, the whole design has been developed in an extremely exciting way. In the plot, however, the TV adaptation doesn’t come close to the novels (okay, when is that the case?).

Either way, it’s a good series for a series marathon over the holidays. It is a real pleasure to stroll through Bay City with Joel Kinnaman with a grumpy expression on his face and mostly quite bare. 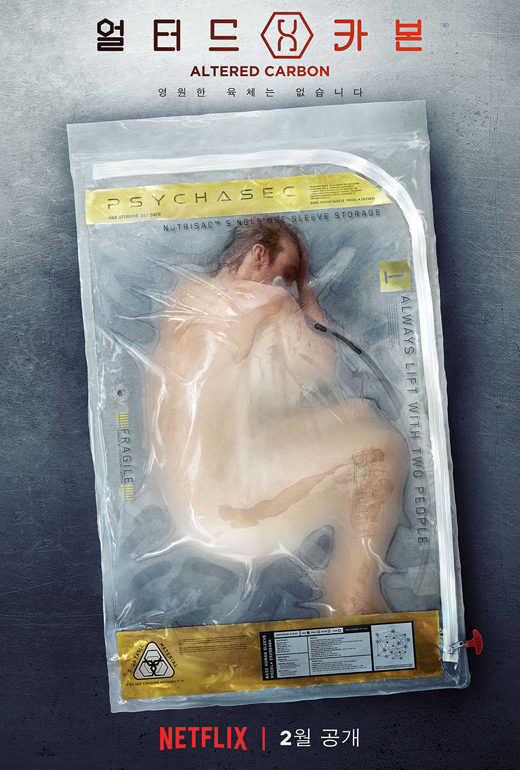 The film is set in a dystopian future Los Angeles of 2019, in which synthetic humans known as replicants are bio-engineered by the powerful Tyrell Corporation to work at space colonies. When a fugitive group of advanced replicants led by Roy Batty (Hauer) escapes back to Earth, burnt-out cop Rick Deckard (Ford) reluctantly agrees to hunt them down.

The film has influenced many science fiction films, video games, anime, and television series. It brought the work of Philip K. Dick to the attention of Hollywood, and several later big-budget films were based on his work, such as Total Recall (1990), Minority Report (2002) and A Scanner Darkly (2006). In the year after its release, Blade Runner won the Hugo Award for Best Dramatic Presentation, and in 1993 it was selected for preservation in the U.S. National Film Registry by the Library of Congress as being “culturally, historically, or aesthetically significant”. A sequel, Blade Runner 2049, was released in October 2017.

Neuromancer is a 1984 science fiction novel by American-Canadian writer William Gibson. It is one of the best-known works in the cyberpunk genre and the first novel to win the Nebula Award, the Philip K. Dick Award, and the Hugo Award.[1] It was Gibson’s debut novel and the beginning of the Sprawl trilogy. Set in the future, the novel follows Henry Case, a washed-up computer hacker who is hired for one last job, which brings him up against a powerful artificial intelligence.

Patreon is like subscription, membership and crowdfunding all in one.
Just a lot cooler.
Here you can see how it works.